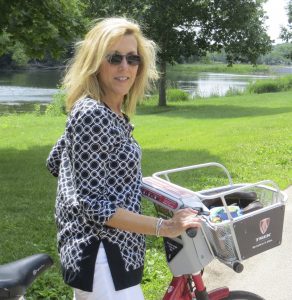 Jan Schroder is an award-winning writer based in Atlanta. She is editor-in-chief of the digital publication and website, The Travel 100.

Jan freelances for  Fodor’s Travel, Orbitz and regional magazines, and appears on the radio on “Belinda Skelton’s Atlanta Living” on WSB as a travel correspondent. She also contributes to Belinda’s website. She is a member of the Society of American Travel Writers.

Jan worked as a paralegal, membership manager of the High Museum of Art and stay-at-home mom prior to beginning her journalism career. She is former managing editor of Travelgirl magazine, was a featured blogger on the Atlanta Convention and Visitor’s Bureau website and has been published in Elle magazine, Creative Loafing, Atlanta Parent, Fulton County Daily Report, the Charlotte Observer, and Chicken Soup for the Expectant Mother’s Soul. Her articles have also appeared online in the Miami Herald.com, Ledger-Inquirer and Charlotte Observer.

Formerly the editor of Atlanta Intown newspapers, Jan was also a newspaper columnist for many years for those newspapers as well as The Story and The Reporter newspapers.

She is the author of three books, Just a Stage, Murphy’s: 25 Years of Recipes and Memories, and Raising the Bar: Legendary Rainmakers Share Their Business Development Secrets, which she ghostwrote for a client of Schroder Public Relations. With her former book publishing company, Schroder Publishing, Jan also published Souper Jenny Cooks and No Such Thing as a Pretty Good Alligator Wrestler.

Her travels have taken her crocodile hunting in Belize, snorkeling in San Salvador and Bora Bora, snowshoeing in Yosemite, sailing in the British Virgin Islands, ziplining in Costa Rica and doing a whole lot of nothing on as many beaches as she could find. Highlights include watching her daughter run the Olympic Torch in Klamath Falls, Oregon, biking down Haleakala in Hawaii, and dining with her extended family at a castle in Tuscany.

Links to Other Publications:

These 12 Stunning Hotels Require Extreme Transport
From prisons to pints and pillows: 11 places where you’ll want to serve time
Loo with a View: 10 Public Bathrooms That Are Works of Art
10 Trippy Treehouses That Will Have You Screaming ‘Feed Me Like a Baby Bird’
The Magical Mystery Trail of California’s Route 395
5 Places to Savor the Flavors of the South Without Leaving the Atlanta Airport
What Lies Beneath: 8 Treasures in Hotel Basements

Beautiful Ballyfin
A Passion for Primland

Elevate Your Experience at Sumaq Machu Picchu
Get to know Puerto Rico’s private island resort
Experience the Palms Hotel & Spa of Miami Beach
5 Gorgeous Resorts Where You Can Fly Fish. Or Not.

• The Atlanta 100 (and affiliated websites)

How to spend a day in Canada’s Niagara Falls
Brightline adds express train service to Miami
Best day passes in Nassau
Where to stay in St. Augustine
This NYC hotel has it all. Or does it?
Atlanta’s Airbnb Treehouse

• Green Eyeshade Awards from the Society of Professional Journalists
• 2011 Benjamin Franklin Award for Excellence in Independent Publishing, for “No Such Thing as a Pretty Good Alligator Wrestler.”
• Golden Flame Award from the International Association of Business Communicators for feature writing for “Child Abuse: A Hard Look at Disturbing Facts”

I do partner with affiliate marketing companies to help cover expenses of my blog, however all opinions on my site are my own.