“You may meet the love of your during a pillow fight in the lobby.” That was in the reservation confirmation I got from Moxy NYC Times Square. That really got me thinking. Was this a nightly occurrence? What would be the appropriate attire for a lobby pillow fight? Would there be milk and cookies, or better yet, a nightcap after the fight? Say I was single and looking to meet someone – how would I judge their suitability as a partner during such an activity?  It was all too exhausting to consider. And the real question is: can a boomer find happiness in a millennial-focused hotel? Would we be a good match?

I was headed to the New York Times Travel Show, preceded by a media marketplace, and The Moxy was one of the hotels hosting journalists. The location, at 7th Avenue and 36th, looked perfect for getting to the Javits Center and for my husband to hop on the subway for his business meetings. And the rooms looked nice online. I knew that as non-millennials, we weren’t their target demographic, but I’d stayed in Public Hotel, which was way too hip for me, so I considered myself up to the challenge, with my resolve only wavering after the pillow fight confirmation.

Check In at The Moxy

I’d read it was a self check-in situation or you can check in with the Marriott app and have keyless entry. But when we arrived there were several desks with people ready to help. A courteous young man checked us in very efficiently, then showed us how to use the keys to access our room and the lounge/co-working space.

There’s a pad on the outside of the elevators where you punch in the floor you’re heading to and scan your hotel key for access. So when you get inside there are no numbers to punch. The elevator already knows where to take you.

Finding our room was a bit of a challenge. There was signage, but there are lots of turns and twists until we found room #1018. 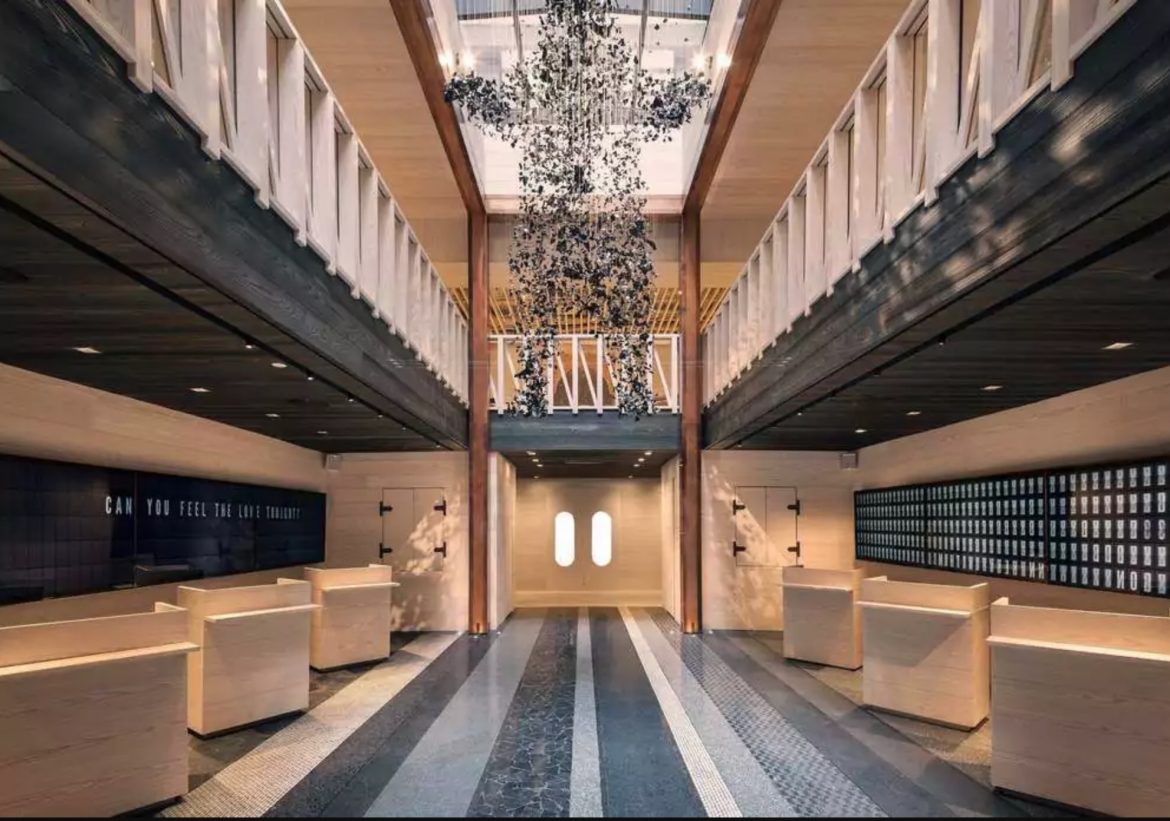 Bedrooms at The Moxy

Moxy NYC Times Square has 612 rooms with various configurations, with king, queen, double twin and bunk bed options available, ranging from 150 to 350 square feet. Every room comes with a 43” flat screen, walk-in rain shower and free wifi. Toiletries are minimal, but the room did have a clothes steamer – a nice alternative to an iron.

Following the latest trends that supposedly appeal to millennials, there are no dressers and no closets. There are hooks along the wall with a few hangers. My favorite feature was the fold-up furniture hanging on the walls. If you need a table, grab it and pull it out. We had two chairs that could also double as luggage racks so we used them for that. It’s a clever way to give you more floor space when you need it.

I didn’t miss a dresser because I’m rarely anywhere long enough to fully unpack. Plus, I’m too lazy to do so and am generally rushing out to do something way more fun than organize clothes. To me it was a bonus: no feeling guilty for unpacking and less chance of leaving anything behind.

The shower had amazing water pressure. During our three-night stay I heard several people make the same comment. For me the water could have been just a touch hotter.

There’s a bit of storage and a safe under the bed and a small nightstand that could double as a desk. We also had a large beanbag in the corner of our room we could have lounged on.

About the bed – I found it super comfortable and really appreciated that fact after suffering through bad beds at two separate places just in the past few weeks. And I’m not all that picky about mattresses.

There’s a 24-hour gym and all of the rooms are pet-friendly with a one-time charge of $75. Now that we’re talking rates, I’ll mention that rooms at The Moxy start at just $89. That’s a steal for the location and the quality. However, there was one major consideration when thinking about staying here. But I’ll get to that in a minute.

Dining at The Moxy and NYC’s Largest Rooftop Bar

The Moxy has five dining options: Legasea, a seafood brasserie; Egghead, an all-day breakfast sandwich shop; Bar Moxy, which is surrounded by the collaborative work spaces on the second floor and The Pickup at the back of Bar Moxy, a grab and go café.

Because I was attending a conference I didn’t have a lot of available meals. We did try a decadent breakfast sandwich at Egghead, which includes options with black beans, kale and avocado and has delicious hash browns oozing with pecorino cheese. One morning my husband grabbed some overnight oatmeal at The Pickup and loved it.

Upon arrival we were given tokens for a welcome drink at Bar Moxy. My husband had a meeting, and I needed to check email and do a bit of work. So I grabbed my laptop and token to go check out the co-working/ lounge area, anticipating crashing a millennial mecca where all eyes turned around to see whose mom had come in.

The token was good for a prosecco/strawberry concoction or straight prosecco, which the bartender cheerfully served.

Despite my imaginative paranoia, no one paid any attention to me and I saw several age groups represented in the groups of people dotted about the large space. I surveyed the room and spotted several seating options with chairs, couches and stools both by the bar or by the large windows. I settled in a chair and opened my laptop, feeling comfortable and not out-of-place due to my boomer status.

In the photos the Magic Hour Rooftop Bar & Lounge looks amazing. That’s as close as I got as I was away from the hotel every evening. It’s got multiple bars indoors and out and skyline views and with 10,000 square feet, is the largest indoor/outdoor lounge in New York. It’s themed as an urban amusement park, so you can ride the carousel, view oversized topiaries and play miniature golf at Foreplay. Heidi Klum had her legendary Halloween party there, immediately branding it as an “it” place in New York.

Had time allowed we could have taken a free 8:00AM yoga class there on Friday, which is more our speed that a nightclub anyway.

So what’s the catch? The problem with is the bar is open until 4:00AM. And hotel guests can hear it being open until 4:00AM. I had read about issues with noise in the hotel reviews and when I saw earplugs neatly laid out for each of us by the beds I knew they weren’t kidding.

The noise was tolerable Wednesday and Thursday nights and I didn’t bother with the earplugs. But Friday it seemed to crank up, and I cracked open the package and put them in. That seemed to help and I slept fine.

So back to my Carrie Bradshaw musings. Should a boomer stay in The Moxy NYC Times Square? The boomer really liked the hotel and to me the benefits of location, affordability and unique design offset the late-night noise. I’d stay there again. And be thankful for the earplugs.