Travel Tips: 3 Things Never to Do When Packing 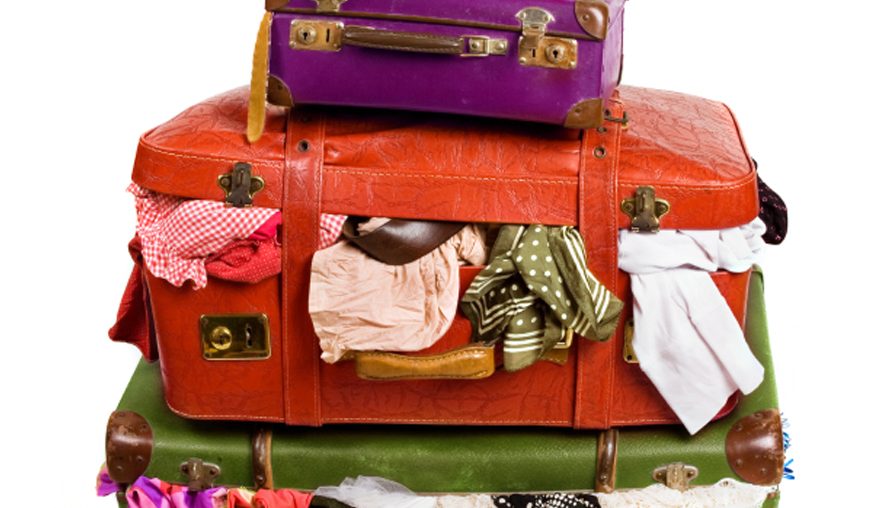 Packing mistakes – I’m the queen. I read every article I can on packing tips, and while I may learn something from each one, I still manage to make new ones. I give myself points for creativity, but that doesn’t help much when I’m at a remote resort with no underwear.

Just recently I got to Chicago and found that I’d packed two left shoes. I have two pairs of shoes the exact same as one of them was getting a bit work out. Clever, huh? Not so much when you pull them out of your suitcase and discover they are both for your left foot.

That night I grabbed my pajamas and found mistake #2. I also have two pairs of pajamas out of the same fabric and I had grabbed two pairs of bottoms rather than a top and a bottom, which is my preferred night-time attire.

Here are a few of my tips I learned the hard way. I hope you can learn from them.

For example, one may have assumed that attending an event called The International Festival of Love may require just a few love beads and a sarong. I did know better than that – after I enthusiastically accepted the invitation based on the name and location alone (Bermuda!) I did my research. The festival offered a more spiritual vibe, with would require real clothes.

Bermuda is an island, right? And it would be warm in February. Wrong on both counts. The average temperature in this island found roughly parallel to South Carolina is 68. And it’s hardly tropical.

So when I packed my floral sundresses, flip-flops and sunscreen, I looked like I was searching for the nearest limbo line and an umbrella-embellished rum drink while other guests were dressed in somber shades of gray and black and elegantly drinking their gin and tonics. So that’s mistake #1.

1. Packing Tips: Don’t take the wrong clothes for the location.

I generally do well at fitting in with where I’m traveling. I pack black, black and more black for Paris and stylish walking shoes for any European destination. In India I knew to cover my shoulders and wear long pants for many of the sites we visited.

Yet somehow I missed this one about Bermuda. But I learned my lesson and have not repeated that mistake. When I’m unsure, I Google “What to wear in ____” or rely on the advice of friends. Prior to spending a week in Nantucket this summer, a friend advised me to pack a lot of blue-and-white striped clothing, which happens to coincide with one of my addictions. Despite the preponderance of stripey clothing already, I used it as an excuse to buy a few more items.

2. Packing Tips: Don’t take the wrong clothes for the weather.

I’m not a complete idiot. Years ago when I was packing for a summer trip to Colorado I did check the average temperature there. But I was sweating in the 90-degree heat, and kind of didn’t believe it. How could it get down to the 40s at night?

So we get to Breckenridge, where the thermometer never rose about 60. We wrapped ourselves in blankets to go on a boat ride and shivered through a picnic. I wore the same pair of long pants and the Breckenridge sweatshirt I hurriedly bought the first day every single day. Ok, maybe I did wander into idiot territory.

I just did the same thing last week on a trip to eastern California. While searching the weather forecast, I saw lows of 43, so I packed my travel down jacket. I never wore it once, while I had no appropriate clothing for the day in Death Valley when the temperature on the van reached 150. That is not a typo – 150 degrees.

We were allowed to leave the van on very short excursions, while being admonished to constantly down water. Stepping out of the van felt like walking into a giant hair dryer. I had packed not one pair of shorts, and resorted to wearing my hiking pants and one sleeveless shirt. Again.

I read a quote recently that said, “Make mistakes. Learn from them. Move on.” Apparently, I’ve only incorporated one of these steps when it comes to packing this most necessary item. I’ve forgotten my underwear – four times.

My solutions to this situation have been varied.

– Wore my husband’s boxers
– Wore the one pair of underwear I had, wash it, and alternate with a bathingsuit bottom
– Considered buying the piece of dental floss that was marketed as underwear at the resort where I was staying in Panama, but rejected both the high price ($15) and low coverage. I tend to prefer the other way around on any underwear purchase.

I have no explanation and no excuse for making the same mistake four times. One solution would be to leave several pairs of underwear in my suitcase. But my husband and I switch back and forth with suitcases, and I’m not sure that method would work well for either of us.

I’ve decided to employ another method. I scrawled a large sign with a Sharpie and put it in my pajama drawer, as I always remember those. It’s a kind note to myself, intentionally not mentioning my past transgressions. It simply says, Forgetting anything, Jan?