From Cute Mouse to Unclothed Miss America: Halloween Costumes for Every Stage

I consider myself somewhat of an expert on the subject of Halloween costumes. I have sewn more costumes than Seattle has coffee beans, hosted numerous grown-up Halloween parties, attended several children’s costume parades, and watched “It’s the Great Pumpkin, Charlie Brown!” at least 37 times. As the self-proclaimed Queen of Halloween, I have observed the stages of life through the evolution of the costume a person adorns for Halloween.

Infancy: The infant demonstrates little resistance to any embarrassing costume the parents wish to put on him or her. This is a big time for little lambs, peas in a pod, baby cows and little pumpkins. It has not been determined whether infants have any idea of the silliness bestowed upon them, or just lack the necessary physical skills to rescue their dignity. There is a big increase in the sale of Super Glue during October as parents attempt to attach antlers, pig ears and foliage to the bald heads of babies.

I did it too. I dressed my daughter up in a clown costume and took her to a few neighbors’ houses. She did look cute, but more importantly, I got to eat the candy.

Toddlers: These are the prime years for adorable costumes. I have no scientific evidence to support this; however, I have a theory that one of the reasons mothers go through the physical discomforts of pregnancy and childbirth, not to mention the financial and emotional investment of raising children, is to see them in their Halloween costumes when they are toddlers. There is nothing cuter than a three-year-old dressed as a ladybug, a lion or practically anything from the mammal family. Older preschoolers may be firefighters, ballerinas, princesses and cowboys. The popular Disney character of the year is sure to have many followers. Many parents were relieved by the popularity of Pocahontas, a much easier costume to assemble than the Little Mermaid.

Elementary school: Girls may still dress as princesses or ballet dancers, and animals are still popular. A boy this age wouldn’t be caught dead as a furry animal or anything cute. Super heroes are big. Anything with a bloody or severed limb, blown-off face, visible bodily fluid or with an alien exploding from the chest is considered attractive.

Although discussions about costumes for Halloween may begin somewhere around Valentine’s Day, the wise parent waits until October before making any investment in time or materials. Many a child has declared a passionate wish for say, a Power Ranger costume, only to declare on Oct. 30, an even more passionate desire to be a tube of toothpaste. 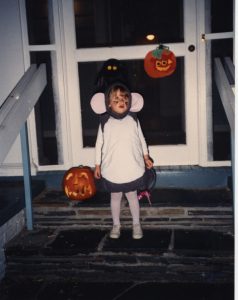 The teenage years: Trick-or-treating becomes optional, but in any event, parents are out of the picture. The male teenager, who has been known to eat the equivalent of a Volkswagen in food at one sitting, is intrigued enough by the possibility of free candy to temporarily forget about being cool. He will pull himself away from “Southpark” long enough to grab one of Mom’s designer pillowcases, and maybe draw on a scar or don an eye patch or some other half-baked attempt at a costume. Then he will proceed to the neighbor’s houses and in a deep voice far past the early stages of puberty, hold out his pillowcase and grunt something like “Unnh.”

Meanwhile, teenage girls gather in a friend’s home, giggle about how juvenile trick-or-treating is, and compare the number of fat grams in a Milky Way versus a Snickers.

College: Many adult themes now emerge, often involving an empty cardboard box being placed on one’s head or prophylactics on heretofore unsheathed areas. Girls who are novices come up with clever ideas, like a refrigerator bag full of leaves. Girls with more experience know that boys will actually talk to them if they wear lots of make-up and the shortest skirt possible.

Adulthood: Grown-ups who have taken on the awesome responsibilities of life often look at dressing up for Halloween as a release. They take this opportunity to live out fantasies, sometimes with shocking results. One such costume I saw was Miss America. Not too unusual until you realize this was years ago when Vanessa Williams was Miss America, and this costume consisted of a beige body stocking, a crown, and the artful use of colorful markers. Another woman was covered in blown-up balloons. Men spent all evening trying to get close to her, especially the ones with sharp edges to their costumes.

As for me, one year I was Fabio. I had black boots, black leggings, a five o-clock shadow drawn on with dark concealer, and a flowing silk shirt, opened to bare my large plastic masculine chest. Talk about fantasies. It was the first time in my life that men stared at my chest all night.