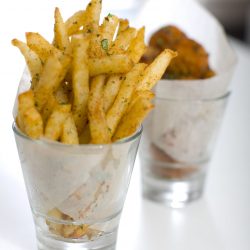 Whoever says women aren’t hunter/gatherers didn’t see me in tracking mode at the opening of the second Atlanta location of Flip. My prey? Another bite of those awesome vodka-battered fried rings with beer honey mustard.

I’d just completed a helping of the equally delicious French fries. These spectacular spuds are elegantly served in a small glass, forever dispelling the finger versus fork issue. They are perfectly lined up for ease in plucking out with your thumb and forefinger. Meanwhile my husband was angling for the beets with goat cheese and licorice, as we are an anti-beet household at my direction. Although I’m fairly certain I saw a Costco-sized jar of the nasty little red things hiding above the dryer, but for the sake of marital harmony, am ignoring it.

I was joined at the opening of a few hundred other lucky souls as we enjoyed the glasses of beer and wine constantly coming around on trays and bites of the menu at the new Buckhead location. One of my favorites was the rBQ, their version of a barbecue burger with coleslaw and smoked mayo.

If you’ve been to Flip then you’re familiar with the drill – smaller sized burgers packed with great big taste. Each burger is made with brisket, short rib and hanger steak. One burger is the perfect size for me, especially when accompanied by one of their side dishes, which also include fried pickles, foie gras nuggets, black eyed peas and smoked Caesar salad, just to name a few.

New burger joints are opening in Atlanta faster than you can say mustard and ketchup, but how many of them include

How about this one, which I guess isn’t technically a burger, but who cares? The Chicken and Waffle is made with chicken fried chicken, collards, sorghum, Tabasco, and waffles. (If there isn’t a band named the Chicken Fried Chickens, I may have to take banjo lessons and start my own country band.)

The space is similar to the original location on Howell Mill Road, and also has the well-lit but still cozy booths along the sides. Both places have great patios, and this one runs along the side of the restaurant, which is located on Roswell Road.

Creative Director is celebrity chef Richard Blais, and executive chef is Jason McClure, who was sous chef at the original location. Flip is owned by Barry Mills, who previously worked at Joël, Food Studio and Buckhead Diner before opening his own restaurant.

Prices are very reasonable here – you can get an order of fries and a burger for around $10. But let’s talk about those desserts, which are served in the form of liquid nitrogen milkshakes, available in your choice of six flavors. Forget chocolate or vanilla – here you select from Krispy Kreme, foie gras or nutella with burnt marshmallows on top. Yeah, we’re talking a whole lot of decadence here. But that’s just part of the fun, right?

The Kitchen Table at Park 75